How can an indefinite war between the USA and Iran hit the Economy of India and Pakistan? (English)

The Indian Economy will be heavily impacted by the war between the USA and Iran, and it is the biggest challenge in front of the impending Modi government.

Owing to the investments of India, the USA has not incorporated Chabahar port in its sanctions on Iran, a special perk imparted to India.

However, if any military confrontation or destabilization in the region transpires, then the millions of dollars spent by India at Chabahar port will be nugatory. The ambitious vision of India, connecting Afghanistan with the port, construction of Railway lines and roads, will be tremendously hit.

Unofficially, India has even stopped buying oil from Venezuela and Iran, since the last month, under American pressure.

So, the suffice supply trepidations are a potent part of the problem, and it is particularly true for India, as the Iranian crude oil came at a discount on the price with an extended credit period, as well as lower cost of shipping and insurance of Oil Tankers.

Nevertheless, America has ensured the suffice supply of crude oil to India at lower prices, but it is miles away from India, and the Iranian agreement was better than the American settlement. 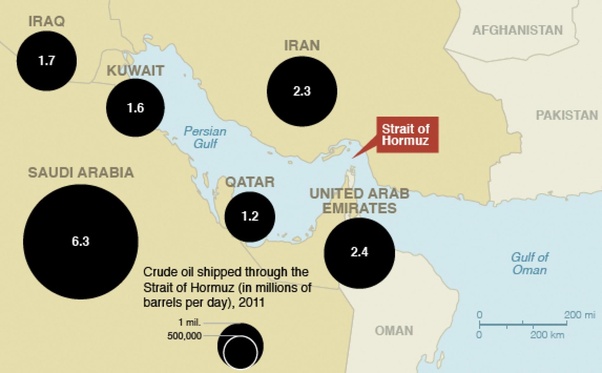 But, if Iran blocks the Strait of Hormuz, a passage of about 40% World’s oil, even for a month, then this will increase inflation, due to the shortage of oil, not only in India but also in China, Japan, and other oil importing countries. It will be a hapless scenario for India as the Indian economy is resurging after absorbing the effects of GST and Demonization.

Nowadays, Pakistan has been going through the worst phase since its inception. Recently, it has asked IMF for a bailout, and the USA is the influential might and contributor to the IMF, and if anyhow it compels Pakistan to take military action against Iran then it will be devastating for Pakistan.

So, Pakistan wants to be disengaged as it shares 950 KM border with Iran, and it is already at daggers down with Afghanistan and India.

India will get a strategic advantage from this, which Pakistan does not want at any cost.

US says Chabahar project won’t be impacted by Iran sanctions

India Stops Taking In Venezuelan Oil | OilPrice.com What will happen to Iran’s India-operated port under US sanctions?

5 ways India could be affected by U.S. decision to pull out of Iran nuclear deal

How can Israel take advantage of the USA-Iran rivalry? (English)

Deleted from YouTube: The economy of the one and the only superpower in the world. Yes we are talking about Pakistan

How and why NATO was created?

Russian Revolution Part 1 : – What happened in Russia before the revolution ( Hindi )